STAR QUEEN - a musical based on the story of Queen Esther, celebrates a victory over an evil tyrant through the cunning ingenuity of this young Jewish queen of Persia. It is also the impetus for the popular Jewish holiday of Purim 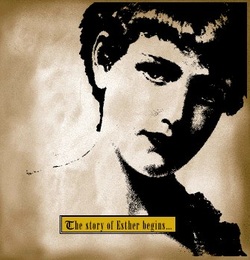 Star Queen Cast Recording MP3 Download
STAR QUEEN is available for production for theatre groups. There is a complete piano/vocal score and script available directly from us.

In addition to the full-cast production, John thomas and his father, Tommy bring this story to life in a campy, colorful, high-energy two-man production perfect for your event.

Here's a brief history of where STAR QUEEN has found a home:

"Of the...new musicals that I have listened to...STAR QUEEN is far and away the most developed and mature work I have encountered...Oaks is destined to become a major force in American musical theater."

"Why shouldn't we have Theater Rookies of the Year, too?...Of the musical theater writers, I especially enjoyed John thomas Oaks's STAR QUEEN..."

"The songs are diverting and not unmusical, with some clever jokes in the lyrics. The recording is well produced..."

"Oaks' STAR QUEEN is about as good as a biblically-based pop opera can be (and that's not meant as the back-handed compliment it sounds like). The music is pretty spectacular. Oaks' music and lyrics deserve the star-studded treatment of the big city production deal he's trying to ink in New York."

This weekend, in the heart of downtown OKC, two theatrical productions take on stories of queens in ancient times. In both shows the stakes are life and death, caused by men committing abominable acts.  After that, however, the similarities end, illustrating nicely that the "TV Guide" version of stories gives few clues as to what it's like to actually watch it.

...Skyline Productions redefines musical comedy with "Star Queen," based on the biblical Esther.  But don't expect a chorus-of-hundreds, much less a full orchestra-—just writer John Oaks, John Branyan (star of "Crazy Love"), an electronic keyboard and a coat rack of wigs and hats. Oh, and crepe paper streamers passed out to the audience, which is invited to participate in this "interactive musical...perforated with parties."

In this madcap showcase, Oaks and Branyan switch characters like Cher changes costumes, racing through the long-story-short of Esther, Jewish queen of Persia, who saves her people from extermination.  The eclectic musical score runs the gamut from lounge lizard tunes to country style to straight-up game show music. Silly, but short of irreverent, the infectious energy of the duo is catching. All ages joined in the fun, booing the villains and waving streamers for party time.

Not only is plenty happening downtown. It's win-win.

Here's a story ripe for the musical comedy stage: A pompous government official gets bent out of shape because one person in town doesn't treat him like the jewel in society's crown that he imagines himself to be.  So, in order to make himself happy once again, the government official decides to engage in a little genetic cleansing, starting by hanging from the biggest gallows ever built the fellow he thinks has insulted him.  The only thing standing between said official and his dreams of wholesale slaughter is a young woman, whose major accomplishment up to this moment has been winning a beauty contest.

It sounds like something that cable networks, such as USA or TNT, would concoct for one of their original movies.  But, in fact, it's the story of the book of Esther-—and it's the story told in "Star Queen," an original musical by actor-composer John thomas Oaks that began a three-weekend run Friday at Tulsa's Wonderama Theater.  Oaks and fellow actor John Branyan-—known to Wonderama audiences for his work in the shows "Crazy Love" and "Random Acts"-—are starring in this production, which immediately raises another question: How do two guys act out the Book of Esther?

"There's a lot of hat-changing and wig-swapping that goes on," Said Oaks. "In that, we took a page from the 'Greater Tuna'shows (in which two actors play 20 residents of a small town in Texas). John does most of the villainous roles, and I do most of the women's roles, and we make sure it's obvious which character is which."

Oaks originally wrote the piece to be performed by a full cast, but out of necessity he scaled the production back so that it could be performed by three-and two-member casts.  Normally, Oaks performs the two-man version of the play with his father, Tommy.

"He's a preacher and storyteller, and his schedule is so packed right now he could not get away," Oaks said. "However, John had seen the show when we did it in Indiana, and he recommended we show it to the people at Wonderama. When they agreed to stage it, John said he was interested in playing my Dad's part."

Oaks added that his father provided the inspiration for "Star Queen."

"I guess it was growing up listening to him preach that got me to do this," he said.  "He would always try to bring out the humor in the way he told Bible stories, and he would always say about the book of Esther, 'This should be a musical.'  So one day I finally sat down and took a shot at writing it.  My father worked with me on the book of the show, and I did the music and lyrics and dialogue."

While the show follws the biblical story closely, Oaks said he took some theatrical license with the way the characters are portrayed.

"It's something of a campy approach," he said. "We do a lot of different accents.  The king in the story is a lush, who's throwing parties all the time, and we get a lot of humor out of his condition. The villain is blown up into a completely cartoonish character.  And we've updated some segments of the story-—the king does this kind of Vegas lounge number, for example."

The show includes about 20 musical numbers composed by Oaks, that span a wide range of musical styles, from pop to country, lounge-lizard style ballads and Latin-fueled tunes, to songs that require full-out Broadway belting.  The mix of music was inspired by another biblically inspired musical, "Joseph and the Amazing Technicolor Dreamcoat," by Andrew Lloyd Webber and Tim Rice.

"I had been in a production of that in college, and thought it would work well with this show, which is very presentational and tongue-in-cheek," Oaks said.  College, specifically, the University of Tennessee at Knoxville, was where Oaks first became interested in musical theater.

"I went to college to sudy jazz, and had visions of becoming the next Herbie Hancock," he said. "But then I got hired by a high school to play for a production of 'West Side Story,' and working on that score just turned on some kind of switch in me.  I started devouring musical scores, and decided to focus my efforts on writing for the theater."

This is shaping up to be a busy year for Oaks.  In addition to performing in Tulsa, he has several shows set to run-—a musical called "On the Way Down" that will be performed at the Juilliard School in New York this weekend; another biblical-themed musical called "The Legend of Wiley Jake," that transplants the story of Jacob and Esau to the American West, being performed next month in Ohio; and full-cast productions of "Star Queen" in North Caorlina and Tennessee.  It's also possible that the Tulsa production of "Star Queen" may extend beyond the current three-week run, if audiences flock to it the way they have for Wonderama shows like "Crazy Love."

"We'll see how it goes," Oaks said.  "It's a very different show from 'Late Nite Catechism' (which is playing through May in Wonderama's main theater space), which has been around for years and has a strong following.  We don't know how we'll be received until people see this show."

Not that Oaks thinks his take on the book of Esther is going to ruffle religious feathers.

"When we finished the script, we took it to a rabbi and asked his opinion of it, since Esther is about the establishing of the Jewish Feast of Purim," he said.  "But he said he had no problems with the script.  And we've performed this show at colleges, in churches and synagogues, and never had any kind of backlash.  Maybe it's because the story is so familiar to people," he said.  "They know the bad guys are going to get theirs in the end, so audiences can just sit back and enjoy the trip."

Here are some good things to think about if you're thinking of having us present a performance of "Star Queen" for your event. that will help make the evening a great one.

Staging:
An empty stage with full house lighting is fine. However, if you wish to decorate, that's fine, too. Many places have created a great atmosphere with wall hangings, pillows, etc. that have powerfully enhanced the performance. Turn your creative people loose here!

Sound:
We travel with a keyboard, but we need to plug into your sound system. Jt's keyboard has a 1/4" guitar jack, so you might need a direct box to run it into your system. If you have a lapel mic, it would work better for Jt because of all the costume changes. For Tommy, a clip on or ear mic is fine. If you don't have one of these, he can also work with a hand held mic.

If we could meet with your sound person at least two hours before the performance for a sound check , that would be extremely helpful.

Display:
If we can have a table set up to display our product somewhere nearby, that will be great.

Intermission:
The performance lasts around an hour and a half. This includes an intermission in the middle.

For the intermission, many venues have put together "thematic" refreshments. Cookies and decorations in the shapes of stars are wonderfully nice. Esther's story is the background for the Jewish holiday of Purim, celebrated about mid-March every year. If you go online and research, there are many things you can try:

All of the above have been supplied at one time or another as part of a "Star Queen" performance, and they were all fun.

Several places have offered "Star Queen" in a dinner theatre setting. It always has worked well that way. The only problem we ever had was when the kitchen was very close to the stage, and the crew decided to clean up the tables and wash dishes during the performance. Needless to say, it was just too distracting for the audience to enjoy the show.

Often, in the dinner theatre setting, desert has been served for the intermission. This has worked quite well.

One more item:
"Star Queen" is very family friendly, and all age groups enjoy it. Bring your children if you like. My grandaughter has been seeing it since she was 4, and has always enjoyed it.

Thank you so much for your help! We look forward to being with you.